Welcome to Day One of Jimbo's Memorial Day Weekend Extravaganza! I'll be posting four reviews in four days for your reading pleasure. Up first, we have Glen Cook. I am sometimes able to get in direct contact with authors, but not this time. Here is what I have about his time serving the good ol' US of A. Cook served in the United States Navy from 1962 to 1972 and specifically was attached, for a time, to the Marine Force Recon unit, 3rd Marine Battalion.[2] During his time attached to the Force Recon Unit, Cook participated in what he called, “practice combat,” and left active duty, “a month before [the unit] shipped out to Viet Nam. 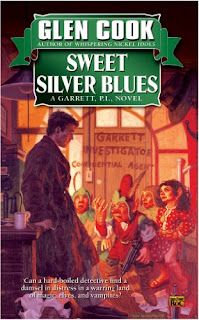 Ok, so maybe the hard-bitten detective is a bit of a cliche. I mean, it’s been done to the point where even Star Trek parodied it. Remember Dixon Hill? And, of course, we’re all Harry Dresden fans here, right? It just works. That’s one of the biggest reasons I love Sweet Silver Blues by Glen Cook. Our main character, Garrett, is the stereotypical cynical detective who has seen it all. Except that this is the first book in the series, so apparently he still has more to see. You’d never make him believe that though.

Garrett is what makes the book. I mean that seriously. Of course, there are a slew of other characters, some major, some minor, some seen repeatedly, others that show up only once. But Garrett is THE MAN in the book. It’s not just that everything centers around him. He’s the main character. That’s how it’s supposed to work. It’s that his personality suffuses the whole book. Sweet Silver Blues has a feeling to it that you can’t quite shake, and it comes from the way Cook depicts Garrett. SWB is a first person novel and that’s a big part of it. Any story is, of course, going to be flavored by its narrator.

Cook’s characters make sense. They do what they do for their own reasons and their reasons are at least somewhat logical. I can believe that Garrett had a tryst with a woman when he was young because that’s what young men want and what young men do. I can believe that people are seeking a large sum of money and are willing to commit fraud to obtain it, because that happens in the real world every stinking day. Money makes people crazy. I used to work in a call center that served over three hundred credit unions. I’ve seen it.

As a side note, and since this is the Memorial Day Event, service members beware. A lot of credit unions serve military members, and I’ve taken the “I just got back from deployment and my wife/girlfriend took everything I own. My house is empty. What’s my balance?” calls WAAAAAY too many times. I left that job in 2012 and I’m still sick of hearing this. (And since I know someone out there is lying in wait to make a stink: Has a woman ever come back to her man having cleaned her out? Probably, but that’s a call I’ve never taken.) Make sure you know who you’re dealing with and know that if it was me, I’d keep some money where only I had access to it while I was deployed.

Sorry. I guess that’s your public service announcement for the weekend. Back to the reason you all came here.

As Sweet Silver Blues is the first in the series, it is also our introduction to the world that Cook has created and it’s a good one. Cook avoids the mistake of many other authors who seek to cram the entire setting into the first two paragraphs. He gives us the details when he needs us to have them and relaxes the rest of the time. I love this approach because it gets me what I need and I don’t feel like I should be sitting in a classroom taking notes.

The fights in Sweet Silver Blues  are epic. They’re up close, personal and intense. They’re more fist fights than sword and sorcery per se in most cases but they work that way and you do get the occasional flash of steel and magical effect as well. Not all of the combatants are human and there are some adjustments made to make that work as well. I was reminded of the time I saw Rocky IV at the theater and the way the crowd reacted. I wanted to cheer, but that wasn’t safe while reading an e-book. I use my cell phone for work. Waving my arms around cheering would have been counterproductive.

Cook’s take on mythological creatures is original too. There are some creatures here that are portrayed in ways that I’m not used to seeing them. There are also some effects that come from certain things that aren’t quite the way I learned it. If you’re the super-nerd purist-guy type and everything has to appear exactly the way it appeared in Bulfinch’s or in LOTR or some other junk you’re going to lose your mind. That’s okay though, because I’ll be the person laughing at you. A fresh take is always good to see and there are definitely a few here. There are also a few new species that I’ve not seen anywhere else and I like that.

The easily offended might take offense at Cook’s offensive use of what he calls “breeds”; half-breeds between humans and magical species. Think Hagrid and Flitwick from Harry Potter. It didn’t bother me. Yes, some of the characters (including Garrett himself) have a negative attitude toward beings that are only half human. It makes sense though. If it’s going to get your panties in a bunch though, I’d suggest reading something else. If you missed it, that’s my version of a trigger warning. Quite honestly though, it’s one of the most believable parts of the book. And if you think it wouldn’t happen elsewhere, I’d suggest you take a look at some of the attitudes that Hagrid has to put up with.

This is the part where I don’t talk about a particular creature that I liked or how they come to be because it would be a spoiler. That kind of irritates me because it was cool but I don’t do spoilers. Trust me on this one though, if you don’t read Sweet Silver Blues you’re missing out on something with these guys.

Magic is handled in a way I’ve never quite seen it done before too. I loved it. Garret has a definite dislike of spellcasters in general and that seems a pretty common attitude. There’s a bit of fear there too. Both are fairly common and yet, it seems pretty easy to use magic if you’ve got the right connections. I plan on reading further in this series and I hope he explores the magic of his world further, because it seems like there’s a lot there we don’t see in book one.

Bottom Line: 4.75 out of 5 Hung Over Detectives

Sweet Silver Blues: Garrett, PI Series #1 is available for purchase at the following link. If you click the link and buy literally anything from Amazon I get a small percentage at no cost to you.