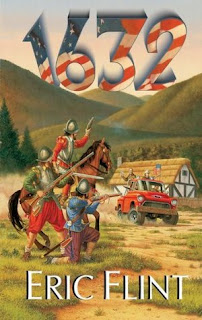 Ok, so maaaybe I'm a guy who grew up in Detroit, but has family in West Virginia, and maaaybe I've squeezed the trigger on a pump shotgun a few times. It's even possible that I've played the odd wargame in my life. I even grew up listening to my dad tell stories about a cave in that happened in a coal mine when he was kid and "a bunch of crying women." (Yeah, I came by my "that guy" streak honestly.) So, it's entirely possible that I may have a few more reasons than some people to love Eric Flint's 1632 and that most of them have nothing to do with how easy it is to type the title. (I am, after all, pictured in the dictionary next to the term "man, lazy".)

Still and all though, it's a book worth buying and reading, even if there are a whole bunch of other books that come afterward some of them with amazing co-authors (I originally read 1632 because I wanted to read 1633  due to the fact that David Weber's name was on the spine and I don't read out of order if I can help it.) and it's probably going to want you buy all of those and read them too...

Look, if you didn't want an enabler for your Speculative Fiction habit you wouldn't be here.

One day some cool stuff is happening and the totally fictional town, well sort of totally fictional town of Grantville, West Virginia and next thing you know - hey presto!- the town and all of the people and things in it are transported to Germany in the year 1632. If you're familiar with that time and place then you're familiar with the problem here. If not, that puts them in the middle of the Thirty Years War and surrounded by the fighting. It's not a friendly place. It is, however, a good place to be armed with a modern firearm if you happen to have one.

This book has it all. It's got action and adventure. It's got romance. It's got sex. Heck, there's even a nerd who gets laid. Seriously. There's even some politics. Actually, there are a LOT of politics because a town full of modern-day Americans who aren't in modern-day America anymore have some things they need to deal with. That could have been a problem for me because, put bluntly, I have about as much in common with a self-avowed Communist politically as I have with an alien from the planet Zargon, where voting rights are determined by how often you bud to create another Zargonian.

Flint, unlike many of his co-religionis..  errr... fellow Marxists, is actually not in a hurry to throw the bill of rights away. Yes, I really mean that. If you're really interested I can send you something I wrote about it. Anyway, there's a lot of it. Flint's stereotypical conservative is kind of a douche, and Flint appears to be as unwilling as any of his fellow leftists to admit that the right actually does differentiate between legal and illegal immigrants,  but hey it's his book and honestly there are a lot of other things going on. It doesn't really detract from the book for more than a second or two.

Honestly, I think the part of 1632 that I like the most is that the government is so small. Even in a town of only a few thousand, it's not the top down society envisioned by most Leftists. The government doesn't try to control everything. Part of that is because the people running the government are smart enough to know that they can't and therefore don't try and that puts them ahead of at least ninety-eight percent of today's Democrats. A certain amount of government is necessary, even if it is a necessary evil. Too much is just evil and Grantville doesn't have the layer of bureaucracy that modern governments are so enamored with. That's why it works.

More important is the society that is built and the way it's done. Even Flint's far left radical finds herself forced to compromise. This is a good thing. It's inevitable and it's realistic. I talk about this a lot but it's something that I think has to be in good fiction: Flint's characters have realistic and understandable motives. Now, the reader my not always AGREE with the motives of the characters in the book but  you can tell why they do what they do.

Yes, Flint's people are people and they live a breathe on the page. There are three young guys in particular who, aside from their love for motorcycles, remind me a lot of myself at the same age. Mike Stearns is a man who I could respect even if I wouldn't agree with everything he does. His wife Rebecca is a scholar's scholar and a woman I have a lot of admiration for. Mackay, the Scotsman, well...

My family is actually Clan MacKay so maybe I'm a bit biased here. I'd still buy him a beer if he actually, like, you know, existed. The thing is that it almost feels like he does.

As the guy with the history degree, I have to point out that what Flint wrote matches up with what I know about the time period in which the majority of 1632 takes place. Granted, I'm not all that familiar with the Thirty Years War as I do mainly US history starting at around the mid eighteen hundreds, but it all works. His depiction of the standard battle tactics of the day is sound. The nobles in the books are all legitimate. He admits to creating a German town that never really existed but 1632 _is_ a work of fiction after all. I also believe that he may have read a book or two about World War I tactics and the effects of machineguns on massed troops, but what do I know?

But for the most part, 1632 is really just a rollicking good time. This is a story that moves from beginning to end and never drags. It's one of those "UGH, STOP GIVING ME RUNS!!! I'M TRYING TO READ AND I DON'T HAVE TIME TO MAKE MONEY RIGHT NOW!" kind of books. That's why I finished it for the third time on my one day off after working seven in a row and why I felt compelled to blog about it. Now go forth and read it!

1632 is available for purchase at the link below. If you click the link and buy literally anything from Amazon, I get a small cut at no extra cost to you.