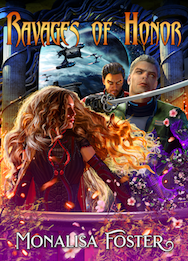 Sometime, in the course of human events, consuming a form of entertainment that is in your favorite genre but it is different in a lot of ways than the works that you usually consume is a good thing. Seriously. Listen, if you read this blog frequently (Hi, Mom!) you know that I usually take my Science Fiction with a huge helping of gun/blaster shots and a heaping side of BOOOOOMMMMMM!!!!! I like that. But let's face it, not all SF has to be that. That's a good thing, because not all SF is that. Take, for example, Monalisa Foster's Ravages of Honor.

Seriously, it's a good book and there is enough gratuitous violence to keep us all entertained. We get everything from veiled threats to outright carnage. I love the fact that Ravages of Honor has a futuristic setting, but a lot of the weapons are things that Richard the Lionhearted or Tokugawa Ieyasu would have recognized. Some of this stuff is just amazing and it fits. Morgan-Foster does a great job blending old with the new. That in and of itself is a bit of a change (and no, lightsabers don't count as ancient weapons) but it's not the one I'm referring to. Don't get me wrong, a sword wielding donai (what's a donai? Well, you can either take my word that it's a genetically engineered person bred for war OR you can read the book and see if I'm telling the truth.) is a lot of fun and not someone I'd want to run up against, but that's not all there is to it.

I've read a lot of Science Fiction over the years. I mean, I started reading SF in the early eighties when I had to go to the public library to get it because I wasn't allowed in the big kids part of the school library. That was a long time ago, seeing as I just hit forty-three. In three plus decades of reading/watching Science Fiction and Fantasy, I have read precisely one other SF/F author that does romance as well as Foster and that's Catherine Asaro. Asaro has won multiple awards from the Romantic Times so I'm guessing that someone with more experience with works in that genre can back me here.

The main characters name is Syteria and she goes through a romance arc unlike anything I've read since probably Radiant Hawk by the aforementioned Asaro. It's weird because I haven't really read any pure romance since I was a kid raiding my Aunt Janice's book collection (yes, it happened. Don't tell anybody though, k? This is just between me and you.) and that's because I'm not really a fan. But if you add it to a SF narrative, I'm in and boy, am I in.

I don't want to give too much away about the arc itself. Suffice it to say that at one point, I thought it might go a different way. I was actually rather surprised that it didn't. I have a habit of predicting the end of a book based on gut feeling and half-considered plot points and I'm nearly always wrong but I was absolutely sure I had this one figured out. Oops.

There is also a David Weber-esque amount of political intrigue. There might actually be more than what he would typically put into a novel, since political machinations in the Honorverseor Safehold, for example, are typically between an established authority and the loyal opposition or a force from outside the state itself. The political scheming in Ravages of Honor takes place within a kingdom. It's a rough galaxy out there and it's one I'm glad I don't have to try to navigate, unlike our heroine.

No, Syteria is not native to the Imperium. She comes from a far off planet and finds herself thrust into a place where she doesn't speak the language and doesn't understand the customs. This is a technique used by a lot of authors. Gene Roddenberry put both Spock and Data into their respective Star Trek series for just this reason. Heinlein used Thorby to show us how Free Trader culture worked in Citizen of the Galaxy. An outsider learning about how a culture works in a work helps the reader/viewer learn about the culture that a writer has created without forcing us to feel like we've been spoonfed information. Foster's use of a time honored technique does her credit. Even for a science fiction author there is no need to reinvent the wheel, especially when it works this well.

Of course, the other characters in the story have to make sense as well, and this is where Foster really shines. I'm guessing she's done some serious research into how real world cultures work because I can see flashes of things here and there that make sense based on a real world perspective. She's mixed things together really well to come up with something that feels authentic but that is original. The characters in Ravages of Honor act in ways that are human. They may not be purely logical, but they make sense given the motivations of the character and that's huge. One of the things that drives me out of my gourd sometimes is when characters act in ways that they have no reason to. Foster's characters do things based on their own thoughts and feelings and the cultures they were raised in.

Don't let all of that fool you though. This is still a strong SF story, complete with starships and secret technologies. There's even a mad doctor and some alien fauna that has the potential to really ruin your day if you're not careful. The thing is that this story would probably work without  the SFnal backdrop if it were rewritten that way. There aren't a lot of stories I'd say that about but ,for this one, it's true. I'll confess to not having read anything by Mrs. Foster prior to this, but I look to be changing that in the near future. If her other stuff is this good, it'll be worth my time. Oh, and it wouldn't hurt my feelings to see this one nominated for a Dragon Award, either. I'll be keeping it in mind when it comes time to fill in my ballot in a few months.

Bottom Line:  5.0 out of 5 Concealed Daggers

Ravages of Honor is available for purchase at the following link. If you use my link to get to Amazon and buy basically anything I get a small percentage at no extra cost to you: